skip to main | skip to sidebar

Lots of things to see and do at Winter Count 16.
February 14-20, 2010 - Sign-up today on-line! Visit backtracks.net and find out more about Winter Count. 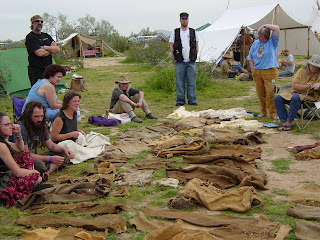 The buckskin clothing symposium is for everyone. This is a workshop where you can pick the brains of those who sew and wear buckskin clothing. Tailoring ideas, patterns, stitching methods and much more can be learned in this informal setting conducted by Winter Count staff. 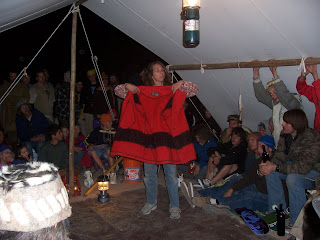 Trade blankets are held on a couple of nights, so bring your homemade crafts, raw materials, and other primitive treasures to share with the other traders. It's a night not to be missed. 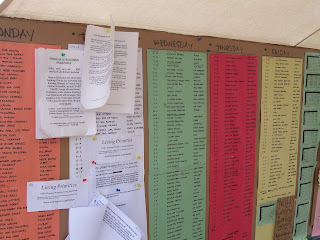 The bulletin board is where the daily action begins. Each day new classes are posted and sign-ups happen. Over 30 classes a day take place from 9am to 5pm. We currently have over 70 staff confirmed to teach this year, so there will be plenty of outstanding instructional options to choose from. 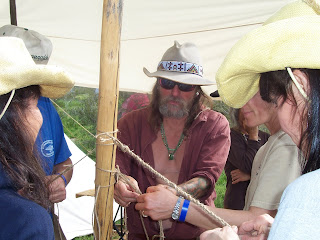 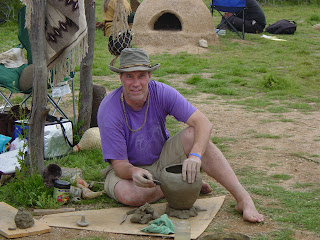 Most classes are hands-on and practical. You can finish lots of small projects or tackle more complex skills like bow making, primitive process pottery or braintanning that will take you from start to finish. 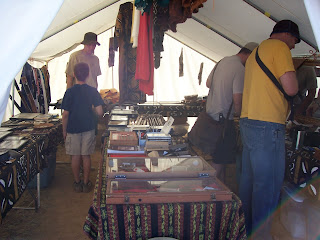 The "ABO MART" is the camp outlet for treasures you can purchase from camp artisans and take home to share with friends.
Posted by David Wescott at 9:25 PM 1 comment:

Sorry for no post last week. I just got back from 6 days of winter camping in the Tetons. It was snowy but warm (that's relative - 18 degrees vs -28 on my December campout). February 1st is the last day to take advantage of the early registration price of $275. After the 1st, the price goes up to $300. We still need you to sign up in advance even after the late registration starts. We have lots of things to plan for in advance, and being able to count on a realistic number makes things go a whole lot easier. Make plans today to join us at Winter Count 16. Register on-line at backtracks.net, or call us at the backtracks office at 208-359-2400 today. Don't wait! 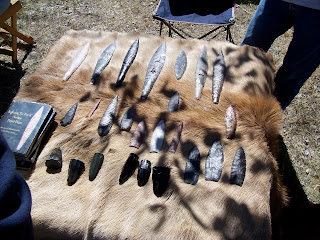 Greg Nunn will be teaching flintknapping. Here is a display of some of his Danish daggers, bifaces and blade cores. Impressive work, as well as his DVD.
Posted by David Wescott at 9:08 PM No comments: 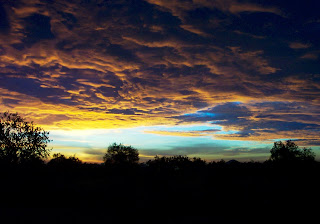 It's 0˚ and clear as a bell in Idaho today. It's also 70˚ and sunny in Arizona. Where would you rather be? Honestly, I love the change in seasons and there's nothing more beautiful than a blanket of new snow on a cold clear day. But by Feb 14, I'll be ready for a break from the daily cold, and we're expected to have fine weather for Winter Count 16. Check out the Almanac report for the week (click on image below). How can you pass up a forecast like that. Make plans to join us in the beautiful desert, and sign up to attend Winter Count today. 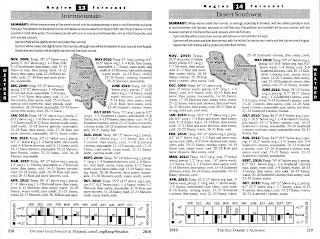 Posted by David Wescott at 4:08 PM No comments: 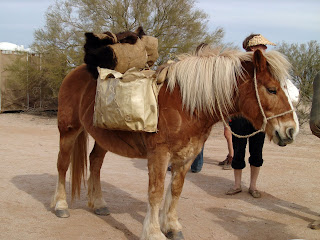 Lynx's Halflinger, Christy, carried her through a few stone age adventures. A pad saddle, rawhide packs and a brain-tanned buffalo hide make her ready for the trip.

Getting To Winter Count

It's always exciting to see who comes to our gatherings and how they find there way there. I can remember one year passing Matt Graham on a bicycle as he pedaled his way from Phoenix to Maricopa. He had walked cross-country from Boulder, Utah to Phoenix, AZ (that means he had to cross the Grand Canyon on foot) and picked up a girl's 3-speed bike at a garage sale in Phoenix to finish his trip. We've had people arrive via horseback, motorhome, even a pedal and sail-powered sea kayak. Vehicles powered by biodiesel, cooking oil, and solar have made it to the site. We had a couple of Germans traveling around the world on recumbent bicycles hear about us and stop by. They were communicating with school kids in Germany via satellite technology, and beamed a rockin' drum session to them halfway around the world. So, you have no excuses for not coming. Where there's a will, there's a way. Be there! 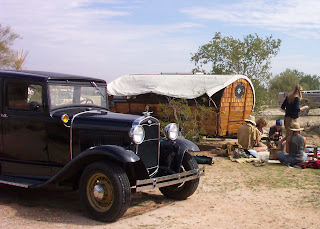 Sunny Baba has created some spectacular wagons and cars for his trips south. This one is from our 2003 event. 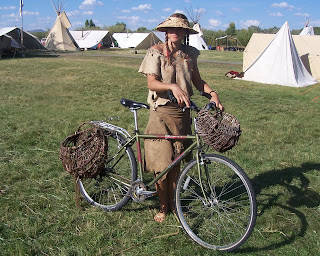 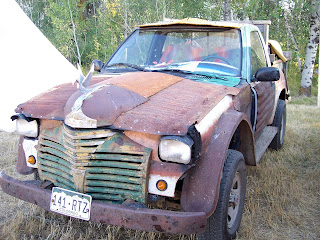 Wolf's latest homemade "rat rod" made quite the scene. 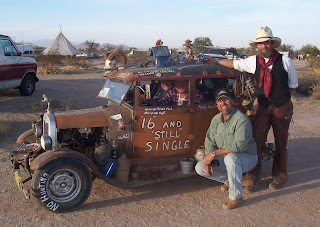 Even the neighbors stop by to show off their favorite flivver.
Posted by David Wescott at 7:56 PM 1 comment: